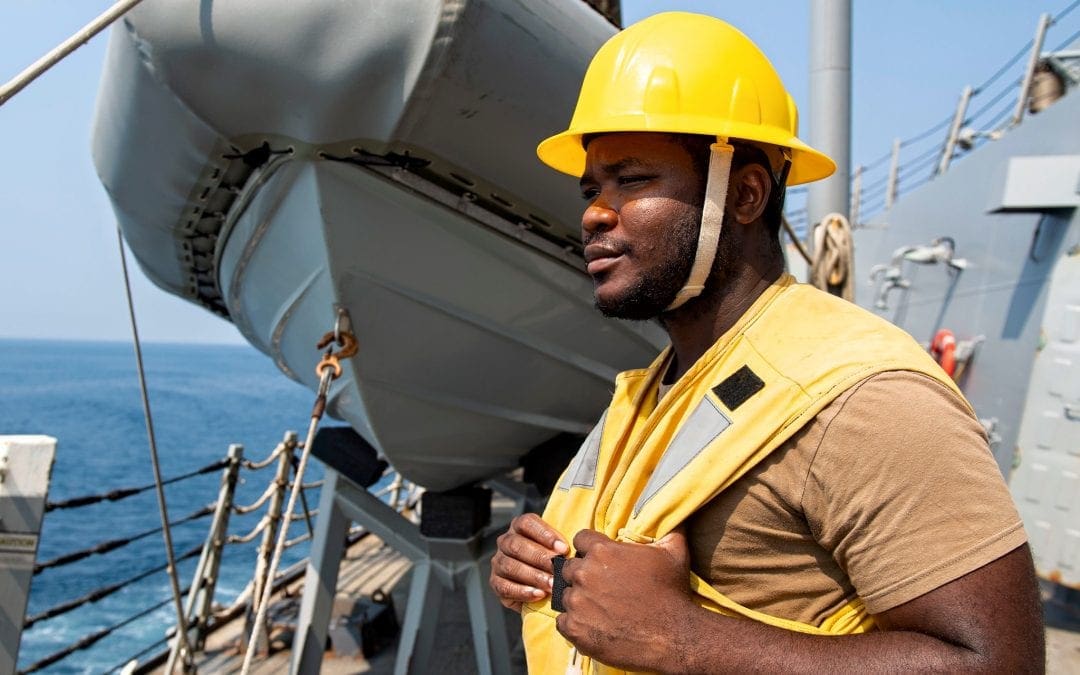 Like the citizens of the nation they serve, Sailors in the U.S. Navy come from all walks of life and diverse backgrounds. Born in the midst of the First Liberian Civil War in 1990, Boatswain’s Mate 2nd Class Kelvin Tyler’s background stands out as unique even among foreign national service members.

“I saw a lot of things that a person shouldn’t see growing up. I didn’t get the chance to talk to a therapist, to talk about what I saw and what I went through,” said Tyler, who currently serves aboard the guided-missile destroyer USS Sterett (DDG 104). “I live with those things every day of my life. I try to be a better man because of those things.”

Tyler and his family fled from Liberia to the Ivory Coast in 1999. He was left in the care of his aunts while part of his family immigrated to the United States, where his stepfather was from, in order to work and secure the finances necessary to have Tyler join them.

“(My aunts) took good care of me,” said Tyler. “I don’t think my mom made a mistake leaving me in their care.”

Tyler’s aunts and mother worked hard to provide for him and he was finally able to rejoin his family in Philadelphia just prior to his 16th birthday during the First Ivorian Civil War.

Tyler credits living through major civil wars in both of his home nations for shaping the person he is today.

“I have always been a happy person,” said Tyler. “I try to live my life one day at a time. What I have lived through in life has helped me understand that you aren’t promised tomorrow. You have to live your life as happy as you can be.”

Tyler was grateful for his new home in Philadelphia and the acceptance of him and his family, though it was not an entirely smooth transition.

“It wasn’t easy adjusting to the social norms and the way of life in the United States,” said Tyler. “It was a culture shock. Different food and schools systems, but I feel like I adapted for the most part.”

After finishing high school and remaining in Philadelphia for several years, Tyler determined he wanted a change of pace and the opportunity to see what the rest of the world had to offer. He considered joining the military not only for the chance to travel, but also because of the benefits.

Tyler decided to enlist in the Navy and graduated from boot camp in 2014. After completing “A” school where he received boatswain’s mate rate training, Tyler reported to the United States Naval Academy for his first duty station. He arrived on board Sterett in 2017.

Tyler said that while his duties aboard the deployed destroyer are difficult, he embraces it.

“I have flight operations, an underway replenishment station and small boat operations. We are always moving, and it never stops, compared to a big deck where there are specific people for specific evolutions,” explained Tyler. “We do everything from the foc’sle to the flight deck. It’s hard, but it’s also exciting. I wake up every morning ready to go.”

Tyler’s hard work and positive attitude have not gone unnoticed.

“He is, without a doubt, one of the hardest working people on board this ship,” said Chief Boatswain’s Mate Cameron McKay, Tyler’s leading chief petty officer. “He is the type of person that completes his assignments with excellent results and will go and find more work to do. He is very firm when things need to get done, and it’s respected by the people that he manages.”

His Shipmates are what Tyler appreciates most in the Navy.

“I love the people I work with,” said Tyler, who added that the diversity of the Navy makes it stronger. “People from around the world working together and every day, we all come together to complete a task.”

Tyler has served six years but says he is just getting started.

“The Navy has been great to me,” said Tyler. “Joining was one of the greatest decisions of my life. I have come a long way, and I plan on going even further.”

Sterett is part of the Nimitz Carrier Strike Group and is deployed to the U.S. 5th Fleet area of operations to ensure maritime stability and security in the Central Region, connecting the Mediterranean and Pacific through the Western Indian Ocean and three critical chokepoints to the free flow of global commerce.