I was the Missile Officer onboard USS STERETT (CG 31) in September 1983 when one evening the military television channel reported that a Korean airliner was overdue on its trip from New York to Seoul, Korea.  There was speculation that the plane had inadvertently entered Soviet airspace and had been forced to land at a Soviet military airfield.  The next day we learned that the plane had actually been shot down by the Soviets.  The day after that we were told by the Captain to go home and pack our bags as we were leaving that evening to go up to the crash site, and with the admiral embarked to serve as the flagship for the search and recovery operation.

After saying goodbye to our families, we departed Subic Bay about 2000 hours that night and steamed to Yokosuka, Japan, were we stopped for several hours to refuel.  From there we proceeded on up to the crash site.  The Soviets were there already.  I remember several Grisha patrol boats, the cruiser, Petropavlovsk and many Soviet civilian ships that included several large fishing trawlers.  Also present were some small Japanese coastal maritime ships.  When we arrived on scene we did not know that we would be there for about 60 days looking for the wreckage.  With all the various ships operating in such a confined area navigating the ship safely required constant attention.  The Soviets started their harassment and intimidation tactics the morning after our arrival when one of their civilian ships began to overtake us on our starboard side.  They approached close aboard in an attempt to have us alter our course to port.  Fortunately for us we had the best C.O. we could have had in that whole operation, Captain Sullivan.  He was not going to let the Soviets push us around and thus we maintained a steady course.  The civilian ship overtook us and passed by our starboard side at a distance I would measure to be less than one hundred feet which is pretty dang close!  That incident set the tone for the entire operation.  The Soviets would try to disrupt our operations by having the trawlers cross the stern of the U.S. ships that were towing side-scanning sonar in an attempt to cut the sonar cables.  The rest of the time the trawlers steamed around in a line abreast while possible dragging the bottom looking for the wreckage.  We were constantly monitoring our distance from Sakhalin and Moneron Islands to make sure we stayed in international waters, 12 miles out I believe.  To go in any closer would violate Soviet territorial waters and risk retaliation or conflict.  And since the Soviets had just days before killed hundreds of innocent civilians aboard KAL-007, we knew they meant business.  Early on I transferred over to the fleet tug USNS Narragansett where I spent 4 or 5 days as the military liaison officer for the civilian manned ship.  Captain Macklin, the U.S. Navy’s Supervisor of Salvage, and a team of engineers were on board as well.  The Narragansett carried an unmanned submersible drone vehicle with video camera with direct link to the surface (much like you see on the documentaries showing the search efforts for the Titanic).  On the camera feed we never saw anything except the sandy bottom and an odd glass bottle or two here and there.  I spent most of my time on the bridge monitoring the Soviet ships maneuvers to ensure we did not by our maneuvering actions violate the International Incidents at Sea Agreement (INCSEA Agreement), and to report any violations of the same international agreement by the Soviets.  While the days in the operating area were often long and somewhat tedious we remained vigilant, especially in those moments when situations could easily have gotten out of hand.

There was always a bit of healthy tension just below the surface, because we knew the Soviets would try to push us into mistakes.  Any misstep or miscue on either of our parts could have been misinterpreted, possibly provoking hostile action.  One incident that stands out in my mind occurred one morning when I was on watch as SWC (Ships Weapons Coordinator) in the Combat Information Center. 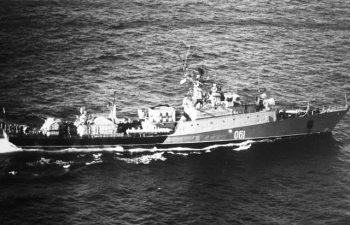 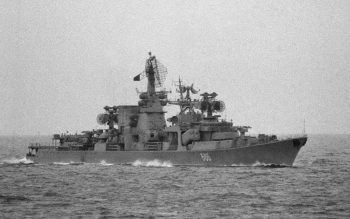 I received a radio transmission from a U.S. Patrol Plane that was in the area of operation.  Soviet fighter aircraft were also overhead that day.  The P-3 Orion aircraft reported to me that they were in a situation where the immediate presence of U.S. Fighters was required to provide them protection and safe escort out of the area of operation.

In the meantime, the P-3 aircraft went into a tight orbit directly over the Sterett.  With Captain Sullivan there in CIC providing me guidance in my response, I told the P-3 crew that the U.S. Air Force had scrambled fighters and they were en route to the area.  As a precaution, Captain Sullivan told me to have the missile house put two birds (missiles) in assembly.  Back in those days missiles were moved mechanically from their storage ring to an assembly area where the guidance fins were manually installed before the missile house blast doors opened and the birds were transferred to the rail (launcher).  Definitely not like the vertical launch missile systems in use today!  Fortunately for all of us the fighters arrived and escorted the P-3 aircraft out of the area without incident.  The fact that we had to scramble fighter protection from Japan to provide safe escort for our patrol plane who had reason to believe he were in serious danger, and the fact that we were making preparations to put missiles on the rail if that became an absolute necessity to ensure the safety of our aircraft should give you an idea of how serious the situation really was at times.

In 2011 with the Soviet Union is no longer in existence, we might not realize that the Cold War was more than a term in fictional bestsellers, it was real.  I have many more memories of that operation including the major press event on board where I saw national news reporters who I had only seen before on TV back home in the States as well as a reporter from a new television company that was just then making lots of news by the way they reported world events.  That groundbreaking network was CNN.  The KAL-007 operation was an important historical event, and although we did not locate the KAL-007 wreckage it was a noble effort by the U.S. Navy, and one that the entire Sterett team took very seriously.  I am just glad that I was able to be a part of that team.