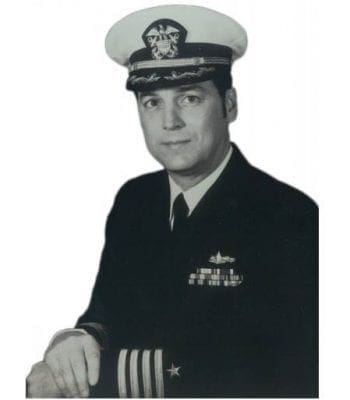 Captain Lockett graduated from Rice University in 1961 and joined the Navy as an Officer Candidate Seaman Apprentice in June 1961.  In 1962 he reported to USS Lofberg(DD-759),undergoing overhaul at Hunter’s Point Naval Shipyard, San Francisco,California.  He served in all five sections of the ship’s Operations Division and completed two deployments to WestPac.  In 1965 he was ordered to the Naval Postgraduate School in Monterey, California, where he earned a M.S. in Operations Research.  In 1967 he began a doctoral program in Mathematical Statistics at Stanford University and was awarded a Phd in 1972.
Captain Lockett joined USS Reeves (DLG-24) in Pearl Harbor, Hawaii, as Operations Officer in 1971.  Reeves conducted two deployments, including September 1971 and September 1973 when the ship operated in the Gulf of Tonkin in several air defense positions.  From October 1973 to March 1976, Captain Lockett served as a Program and Operations Analyst at the Center for Naval Analysis in Arlington, Virginia.  From July 1976 to September 1978 he served as Executive Officer in USS Gridley (CG-21), homeported in San Diego, California.  Gridley was fortunate to make ten port calls during WestPac deployment.  Captain Lockett’s next assignment was in OSD (PA&E) in Washington DC, as the Mobility Forces Program Analyst.
After attending the Senior Officer Ship Materiel Readiness Course in 1980, Captain Lockett assumed command of the USS Berkeley (DDG-15) in San Diego, California, in January 1981.  The ship’s WestPac deployment included operations with the Navy of Thailand, a visit to Australia, and a rescue of Vietnamese boatpeople at sea.  Berkeley received an extended overhaul at LongBeach, California upon return from WestPac.
After a Post-Command Course at the Naval War College and several positions in the Office of the CNO, Captain Lockett assumed command of USS Sterett (CG 31) in Subic Bay, Philippines, in 1985.  Sterett served as flaghip for CTF70 and in several contingency operations, including an unscheduled 83-day deployment.  Sterett also performed as “Tattletale” to Soviet carrier Minsk and observed Soviet missile exercises.
Captain Lockett’s final assignment was as Deputy Director of the Research Programs of the Office of Naval Research in Arlington, Virginia.  After retirement from Active Duty in 1990, he joined the Institute for Defense Analyses in Alexandria, Virginia, serving as a Defense Analyst in the Operational Evaluation Division.  In 2009, he joined the Institute’s Adjunct Staff prior to retirement and relocation to San Marcos TX.
Captain Lockett passed away February 24, 2018.